I’ve spent extended time on this chapter as it is so very important to all of you. Let’s start with a story.

Imagine a salmon swimming somewhere in the waters of Alaska where it is cold, very cold. The salmon has to maintain its body temperature no matter what the temperature is around it. How does it do this? It builds a layer of fat over its body that insulates it from the water temperature. The fat contained in this layer is a special kind of fat called Omega-3 that not only insulates, but at the same time dilates the arteries of the salmon. In addition, since the cold could precipitate blood clots, it inhibits the function of platelets, which are the small components of blood that promote clotting. What a great solution to a problem! The same fat that insulates the fish has special properties to open the blood vessels in that layer. Now that’s engineering!

There are three major types of Omega-3 fatty acids: alpha-linolenic acid (ALA), eicosapentaenoic acid (EPA), and docosahexaenoic acid (DHA). EPA and DHA, the two most digestible, are the ones found in fish. All fish have some amount Omega-3; but fatty fish like mackerel, lake trout, sardines, albacore tuna and salmon are the best sources.
So what happens to us when we eat this salmon? We absorb the Omega-3 fat and our arteries remain open and our blood doesn’t clot as fast as it would otherwise. That is why we’re supposed to eat a palm-sized portion of cold water fish two or more times a week.
Fatty fish typically are cold-water fish. You have many good choices when it comes to fatty fish. The American Dietetic Association  recommends:

Eat a palm-sized piece of cold water fish at least twice a week to get your Omega-3s.

The above is true for wild-caught fish only. Many fish options at your local grocery store are farm-raised. This can be a problem. When fish are farm-raised, they are oftentimes fed corn (like our livestock) which then negates their Omega-3 advantages. Corn contains high levels of a fat called Linoleic Acid which is preferentially converted into Omega-6 fatty acids. As we said earlier, unlike Omega-3 fatty acids, Omega-6 fatty acids promote inflammation, constrict arteries and promote blood clots.

So which fat do you think is the best one to eat, the salmon or the cow? My answer is that it all depends on how they are raised. If the salmon is wild-caught from free water, it will have high Omega-3s. If the cow is grass-fed rather than corn-fed, it will also be higher in Omega-3s. If the salmon is farm-raised, it’s probably corn-fed which negates the health benefit since it was raised on Omega-6s. This is the same for the cow. Ironically, you might be better off eating the grass-fed cow that is farm-raised than the corn-fed salmon that is farm-raised. How’s that for destructive re-engineering?

Fats are necessary for us to live as our cells would not survive without them. Every one of the trillions of cells in our bodies is surrounded by a cell wall. That cell wall is composed of liquid which holds inside the water-soluble inner workings of our cells.

The most important thing to consider is the form of fat we are eating. It’s helpful to think of the fat we eat in our diet as two separate categories: solid and liquid. The solid fat is like butter or lard. The liquid fats are the oils we consume. Let’s go into some detail on this.

Fat that is solid at room temperature is never good since this is how a majority of the cholesterol we eat is delivered to us.

Cholesterol is a large molecule with a complicated structure. We make a lot of important hormones from cholesterol and it is intricately involved in our cardiovascular health. Even if solid fat doesn’t contain cholesterol, like margarine, it still likely contains saturated fat which the body can easily convert into cholesterol. So, you see, solid fat is a major source of cholesterol or a source of the building blocks for cholesterol. Basically, don’t eat solid fat—it’s never good for you. What food contains solid fat? Butter, margarine and lard are the most common ones. Others include most crispy carbohydrates like chips (even baked ones) and deep fried vegetables. They are crispy because the fat they contain is solid at room temperature. Your body can convert all of this into cholesterol, so limit how much of it you eat.

Liquid fats are the oils. Some of them are very healthy for us whereas many of them are not. Unlike cholesterol, liquid fats are more simple chemicals that are composed of shorter chains of carbon atoms with different amounts of hydrogen attached. When the carbon atoms are “full” of hydrogen, we call them “hydrogenated.” You will see this term on labels. It’s not a good thing.

This unique feature of fatty acids makes them ideal to function as the structure of our cell walls. By lining the cell walls with fatty acids so that their fat-soluble end is on the outside and their water-soluble end is on the inside, cells can sit next to each other with their fat-soluble surfaces together and hold in their water-soluble contents inside the cell.

It’s time again for some science. The photo below is a microscopic image of cells lining the intestine. They are basically lined up side by side and appear clears since they are filled with mucous. 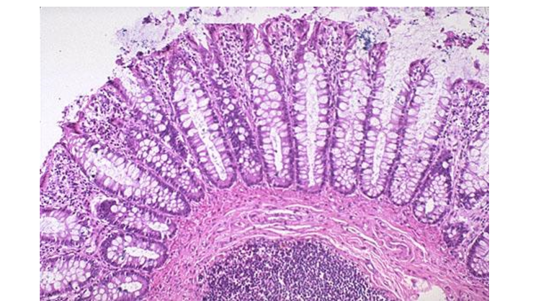 Here you see a diagram of some of these same cells. There is a lining composed of cells that are sitting side by side. One of their sides is exposed to the intestinal contents and the other is at their base.

If we zoom in on a single row of them they appear as you see below.

Each cell has a dark nucleus where its DNA is located and a thick cell membrane where it meets the intestinal contents. This is the side where absorption occurs and so the cell membrane has to be able to hold in the contents of the cell but let nutrients through and expel waste.

The cell wall is composed of fatty acids which are lined up back to back with their water soluble polar ends on the outside and their fat soluble ends on the inside.

This is how all our cells are formed. The walls are composed of layers of fat. Cells are not static structures though. Nutrients need to get in, and waste and carbon dioxide need to get out. Therefore, the contents of the cell wall become very important for our health. Some fatty acids promote good cell wall transmission and others do not.

The reason for the difference in fatty acids is that some of them have special bonds at different spots which alter their shape and affects their function. The one at the third carbon from the omega end and the one at the sixth carbon are really important as you will see below.

The Omega-3 fatty acids have a double bond at the third carbon from the Omega end. As a result of the shape that this imposes on them, they promote more rapid transfer across the cell walls. This is important in tissues like the brain where we want rapid transfer of information. The heart benefits as well since Omega-3 fatty acids stabilize cell membranes which in turn stabilizes the heart rhythm.

Omega-6 fatty acids have a double bond at the sixth carbon from the omega end. They slow transmission, just the opposite of Omega-3s. You therefore want more Omega-3s in your diet. They promote better brain function and more energy.

The table below lists the most common oils we use every day. As you can see, the ratio is radically different. All oils have more Omega-6 than Omega-3, but some like cottonseed oil are almost 100 percent Omega-6. The best is canola oil with the lowest ratio of 2:1. This means that one-third of the oil in canola oil is Omega-3.

The major exception on this list is olive oil. It would appear to not be one of the best oils, but actually the amount of Omega-6 oil is very low in olive oil. Most of its oil content is from monounsaturated oil which is extremely healthy for us and is the basis for the Mediterranean Diet which is very healthy.

The oils derived from flaxseed are extremely high in Omega-3s. The ratio in flaxseed oil is around 0.2:1 which means that it is mostly Omega-3. We should try to bring flaxseed into our diets on a regular basis.

In addition to their effect on blood vessels, one of the other major issues surrounding good fats and bad fats has to do with their effects on our levels of inflammation. Omega-3 and Omega-6 fatty acids can affect the amount of inflammation that is occurring in our bodies. This is important for arthritis and other inflammatory conditions we face. Omega-3s decrease inflammation whereas Omega-6s promote it.

Unfortunately, most of the fat we ingest in our diets is composed of Omega-6 fatty acids. These come into our bodies in the meat we eat, the snacks we eat and the oils we cook with. Always look at labels—choose your fats wisely!

A discussion about fats would not be complete without a word on trans-fats. We hear a lot about them in advertising, and it is important for you to understand why they are bad and where we find them.

Trans-fats are those whose shape has been modified by the food processing industry in order to create crispness and act as a preservative. They are very harmful to us. A common way in which they are formed is when they are “hydrogenated,” which means that they add hydrogen to the fatty acids and break all the double bonds. You don’t have to fully understand what that word means, just that it’s not healthy. Hydrogenated oils are “saturated” with hydrogen and can be very harmful to us.

Stay away from anything that has the words “partially hydrogenated” in it. Cook only with olive oil or canola oil.